It All Began With Nothing
A day, in September 2014. The day I was embracing myself to start building a parkjet from a free RC plane plan, available at RCPowers.com without knowledge on building RC plane at all. It was F-35 v2, one plane that made lots of noises at that time. Succeeded building 2 of this plane, but only 1 flew for just 18 seconds before it crashed.

Then I continued to build the F-18 v3, another free plan from RCPowers.com. And this time, it flew few times successfully, before it lost radio signal and crashed. The second F-18 v3 lasted for 1.5 years serving as FPV platform before it was decommissioned. During the time when flying the first F-18 v3, I saw something that might be useful to some unfortunate people, that might help them standing on their own in pride.

The Steps Further, That Brought Me Here
I didn't know where to begin with, but The Most Merciful GOD led me to some group of people that have been dedicating themselves, to look for after unfortunate kids and try to seek any people who want to support them with all their needs to remain going to school to continue their study and these people has never stopped doing it for more than a decade. I was amazed by them, their spirit, their motivation and their consistency. That group of people is called Anak Asuh Rimbani or A2R in short. Eventhough my knowledge was minimum to none at that time, I encouraged myself that I could share whatever my knowledge is and developed it along the time in parallel with the teaching activities. Those kind people from A2R welcomed me and my 3 other friends to join them and started teaching the kids. But it didn't take long until 3 of my friends pulling themselves off and leaving me walking alone with A2R people as it took high commitment, efforts and consistencies to conduct such voluntary activities teaching the kids. But it didn't stop me from moving and keeping forward. 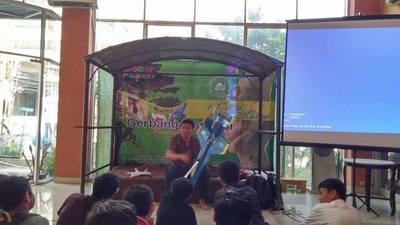 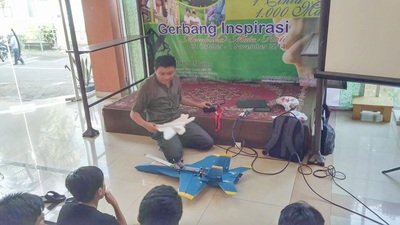 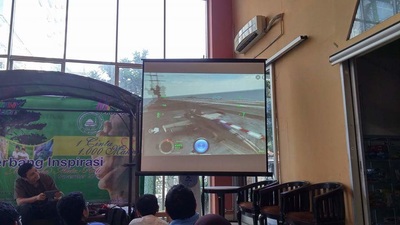 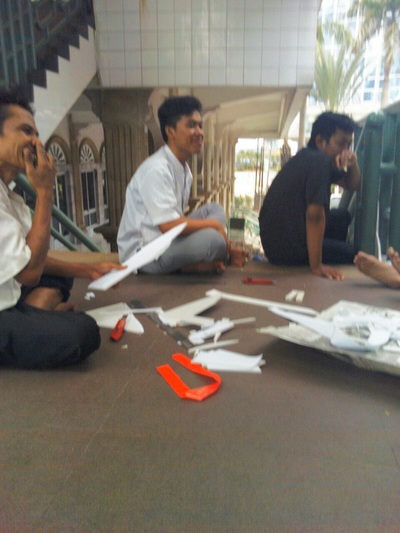 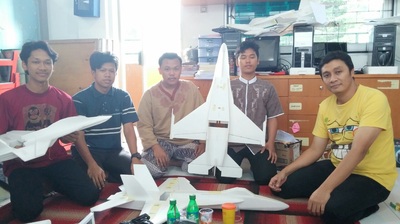 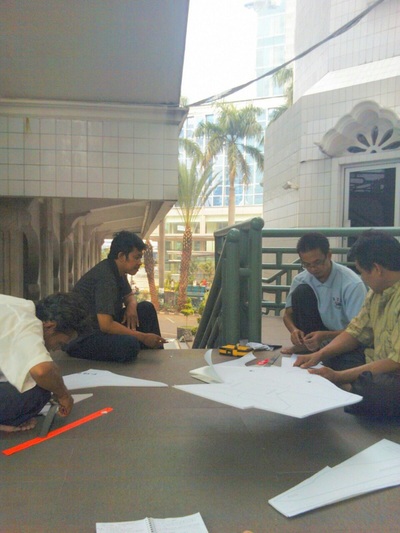 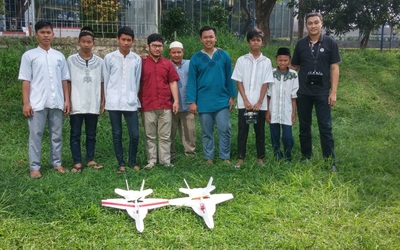 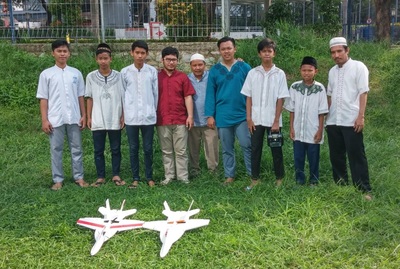 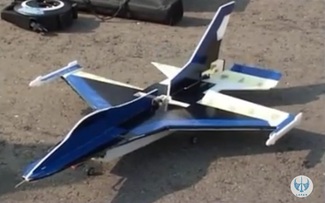 The Light Was Finally Shimmering
The first step taken when teaching and learning to design and build an RC plane, was to design and build a profile plane. With some references we found on the internet, we started to have our own profile F-16 parkjet. After building few of it, then we finally managed t0 have a successful maiden flight of it.

The next event was surprising. Some college students heard about us, and all of a sudden requested the kids to build a plane for them, to participate in an annual competition. This was a huge surprise for us. Never did something as big as this earlier, but we got jackpot opportunity to learn and perform at the same time. We took the chance and started building 3 of it: 1 plane for the competition, 1 plane for backup plane, 1 plane for conducting tests. Those 3 were identical F-16 planes in size and setups.

The test plane flew so well and had amazing maneuverability. All of us were confident enough that it would perform as expected during the competition. Then we handed over the planes to the students. However, at the end of the competition, we received the news that those college students team didn't go home with any trophy. That didn't change a thing as we succeeded to design and build a plane that was supposed to compete and all those planes were built by a small group of unfortunate kids that had no experience in RC hobby before. Nothing. That was already a big success for us all and gave us more courage and motivation to keep on going.

The Fun Continues
The activities in teaching and finding new groups of unfortunate kids and people and giving them the chance to know and learn more about RC scratchbuilding continue. It now brings even more joy and inner peace to my self. Several months after starting the activities with the kids, I offered an elementary school to have aeronautics introduction through aeromodelling scratchbuilding. Didn't expect the welcome from that school was so warm and I started to voluntarily teach as a member of science teacher.

The beginning of the teaching was to teach all the teachers and some 4th and 5th grade students on how to make gliders using party foam plates and straws. All seemed to have fun.

The challenge got to the next level, for my self and the students as I told the student to draw any kind of planes that had to be simple. We came up with some ideas, but we chose to make one that looked like a dump truck with wings. So, the challenge was walking through at me because I had to turn that design into a plane. A flying one. In short, the final design was finished and the students constructed the plane in groups.

The maiden day came and we successfully flew the plane along with some teachers who were very eager and amazed on the activity we started. 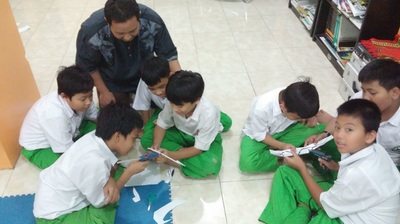 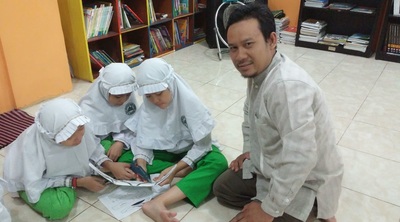 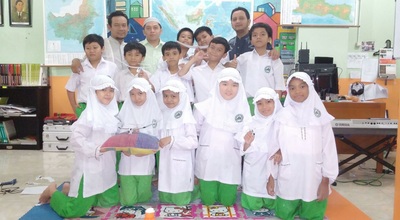 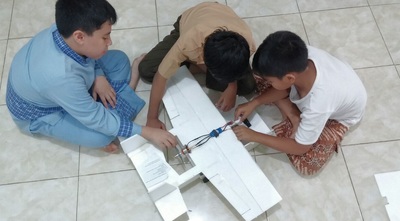 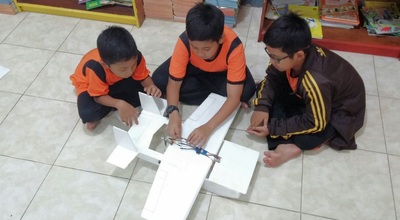 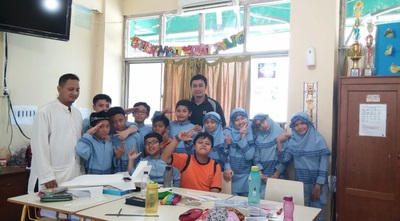 ​Showering Blessings Upon Me
The joy goes on, after I knew Ian Bott and Jeff Reimer in the RCP forum. Those are simply great guys for me and knowing them, feels more than endless blessings for me. They both have been so supportive in the activities I conduct here, even separated between oceans and continents. Another priceless support started to come from our very friend, Scott Challender from NAMC (North American Mig Consortium), followed by some more great people that I must apologize to them because I couldn't name each of their names one by one here. You guys all are angels in flesh! And this drove me to get unlimited fuel boost to be creative, having my own design of RC parkjets.

Then, time to teach some kids on how to fly and they joy could be experienced from the video, below.

​Great Time, Great Fun and Priceless Experience.
The last 2 years have been giving me great time, great fun and even priceless experience. Know all good people out there even though from texts, posts and messages. Seeing some kids grabbing new experience they might never expected to have. And . . . . . the chance for me to have them all, couldn't be exchanged by anything else in this world.

I will try my best to continue the activities, as I see it also gives hopes to many people around me. I hope that it will benefit them, even in just a second of joy they have.

Thank you all awesome individuals who have been giving their trust, faith and support. I could never thank you enough to each of you, in this life. May all the best in life and blessing be showering you all.