The first variant was designed during the 1980s, when Sukhoi sought to upgrade its high-performance Su-27, and was initially known as the Su-27M. Later re-designated Su-35, this derivative incorporated aerodynamic refinements with increased manoeuvrability, enhanced avionics, longer range, and more powerful engines. The first Su-35 prototype, converted from a Su-27, made its maiden flight in June 1988. More than a dozen of these were built, some of which were used by the Russian Knights aerobatic demonstration team. The first Su-35 design was later modified into the Su-37, which possessed thrust vectoring engines and was used as a technology demonstrator. A sole Su-35UB two-seat trainer was built in the late 1990s that strongly resembled the Su-30MK family.

In 2003, Sukhoi embarked on a second modernization of the Su-27 to produce what the company calls a 4++ generation fighter that would bridge the gap between legacy fighters and the upcoming fifth-generation Sukhoi PAK FA. This derivative, while omitting the canards and air brake, incorporates a reinforced airframe, improved avionics and radar, thrust-vectoring engines, and a reduced frontal radar signature. In 2008 the revamped variant, erroneously named the Su-35BM in the media, began its flight test programme that would involve four prototypes, one of which was lost in 2009.
​

When we discussed about making our dream a reality on the parkjet version, we talked about new ideas and new achievements for our next parkjet release. It has to be different from all our previous parkjet designs, yet inherits its stability, agility and flight envelope so we could enjoy flying it like we flew our planes before. So, we came up with the ultimate goal: to get the SU-35 design as scale as possible, including extra details on it, to become our 2nd generation release of the SU-35/37.
​

We pushed our knowledge gained from designing our previous parkjets (most from SU-34B, SU-37 and YF-23) to make this SU-35 G2 our next milestone. It didn't come easy as we need to finish it in such short time. We used Rhinoceros 5.0, OpenFOAM CFD and HP Zbook Studio G3 as our main gears to come up with the design.

My colleague, Jeff Reimer, finished the first prototype. Like always. Giving him the chance to fly his SU-35 G2 much earlier than mine. He got it plain white unpainted for the maiden flight. Then he painted it with Firestorm paint scheme, which looks taunting.
​
And here are some pictures of my own built. Final decals planted are copying Indonesian Air Force Sukhoi squadron insignias. 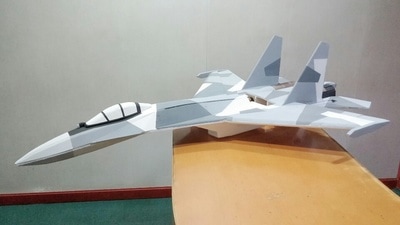 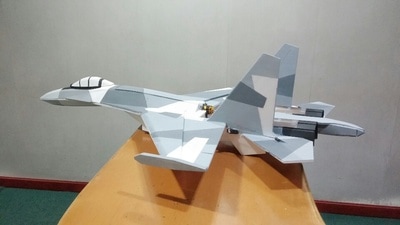 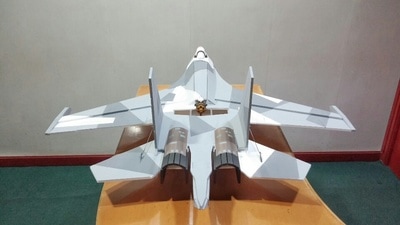 Maiden flight was the moment of truth whether my built would fly like as expected or not. Was a bit nervous as the wind was so unfriendly the moment the maiden flight was about to be conducted. But the SU-35 G2 survived the maiden flight beautifully. Here's the walkaround and maiden flight video.
​
Eventhough this SU-35 G2 doesn't have emulated thrust vector just like all our previous parkjet designs, it doesn't lose its agility and unbelievably maintains its flight envelope for speed and super maneuverability,

The challenges have been overcome, nicely. We have come to a point where we need to push ourselves and our knowledge into something better than this in the future, even that we realize it would be very difficult for us but at least we will try as always. Just as with this SU-35 G2 over the previous designs.

One big step had been successfully made. We're happy to share it with the world. More steps to make, ahead.

Last but not least, we would like to thank our good friend James Soyak for his support during the building phase. Also our buddies at NAMC (North American Mig Consortium) Scott, Stephan and Dave for their support and courage.